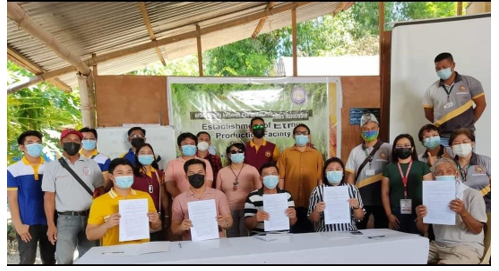 Ethanol production and consumption support the government’s effort to reduce dependence on imported alcohol, protect public health and the environment in this time of pandemic hence promoting rural employment and income.

The town of Lingayen has been identified as one of the major nipa-producing towns in Region 1. A team of specialists from PSU has been trained in the methods of ethanol production with reference to the establishment of Nipa Sap distiller for Bantayan Farmers Association. The PSU STRONG RESEARCH CULTURE AND TECHNOLOGY TRANSFER REIGn division desires to transfer the technology of ethanol production from nipa to the community as part of its education, research and extension mandates.

Paulo V. Cenas, VP for REIGn attended said MOA signing. Both parties mutually agreed that PSU shall be responsible in the transfer and operation of the distiller and that the technology taker shall provide and maintain safe bunkhouse, electricity, and water supply for the facility as one of his responsibilities.