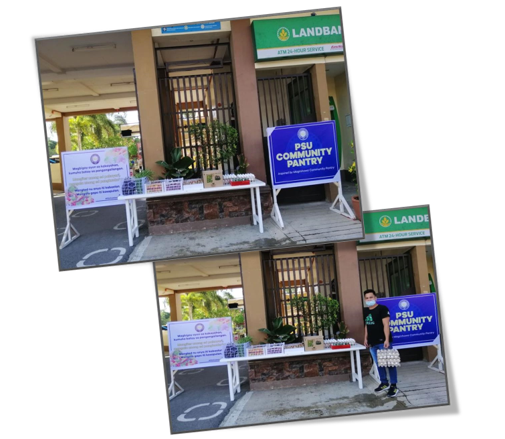 The PSU Community Pantry is not just a stall containing fresh produce and other food, but a powerful idea inspired by the Maginhawa Community pantry which has come out during this time of pandemic when many members of the populace don’t have the means to feed themselves and their families.

The community effort works with a genuine core principle: Everyone is free to donate as much as he can, but no one should get more than what he needs. Established with the accord to community development, the PSU family conjointly shared boxes of grocery items and other food which is now displayed at the entrance of the University for beneficiaries.

PSU’s version follows the tenet, “Magbigay ayon sa kakayahan, kumuha batay sa pangangailangan” translated in Pangasinan and Ilokano dialect which literally states that anyone can give any amount of food items and those in need may get according to their necessity.

As a socially-responsive institution, the PSU administration led by Dr. Dexter Buted, believes that this simple initiative is more than just a social media trend but exemplifies the true Filpino ‘Bayanihan Spirit.’