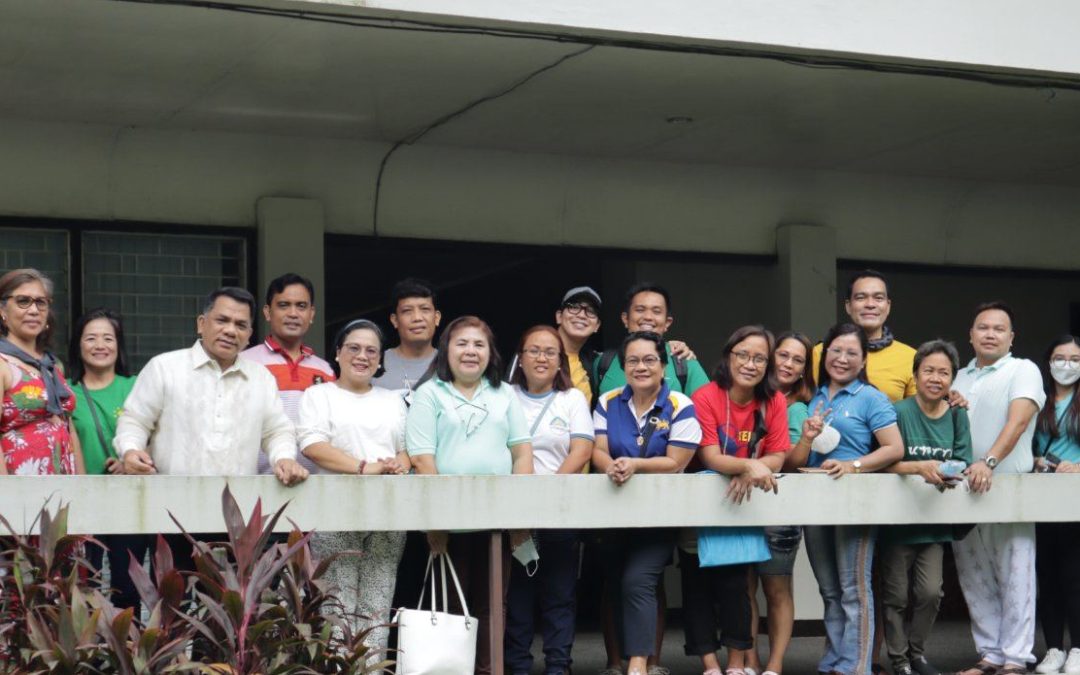 The Pangasinan State University- School of Advanced Studies (PSU-SAS) partook in a benchmarking activity with the University of the Philippines- Los Baños Graduate School in Laguna on July 28, 2022. True to its commitment in being one with the institution’s vision of becoming an ASEAN premier state university, the PSU-SAS continues to forge ahead as it vows to establish close collaborative activities and programs with fellow higher educational institutions (HEIs) both here and abroad as it cements its spot in the international community. The forty-four participants consisted of PSU-SAS faculty and non-teaching personnel and other university support staff headed by Dr. Rosario DL. Valencerina, SAS executive director; Dr. Gemma M. De Vera, SAS deputy director for Academics, Research, and Extension; and Dr. Cristeta C. Dulos, SAS deputy director for Administration, Planning and Quality Assurance. They were received by the Dean of UPLB-GS Dr. Jomar F. Rabajante. Dean Rabajante together with the UPLBGS staff toured the PSU team to the university’s AGORA Hub and One-Stop Shop where the latter learned about the university’s various technologies and tried some of UPLB’s products. Spearheaded by UPLB Chancellor Jose V. Camacho, Jr., the Accelerating Growth through One Research and Extension in Action (AGORA) is a unified research and extension agenda that seeks to contribute more vigorously to addressing the pressing and pervasive problems such as low productivity, unprofitability, and lack of competitiveness brought about by the size and scale of farms and farmer organizations, as well as weak governance, and the dire lack of collaboration with the industry. After the quick tour, the delegates headed to the Makiling Botanical Gardens where Dean Rabajante, Dr. Ronilo Jose D. Flores, associate dean, and Dr. Pamela A. Custodio, secretary along with other graduate school staff discussed UPLB-GS’ Graduate Program Processes and Management. The meeting of minds transitioned to an insightful discourse and exchange of ideas between the members of the two graduate schools in high hopes of fruitful institutional partnership in the years to come. In his closing remarks, Assistant Professor and UPLB Office for Institutional Development in Higher Education (OIDHE) Program Coordinator, Prince Kennex R. Aldama accurately summed up the essence of the visit and said: “Kinakailangan nating buksan ang ating mga pintuan, ang pintuan ng ating mga institusyon para sa bawat isa. Sapagkat ang pag-unlad ng UPLB at ang pag-unlad ng PSU, gaya ng maraming HEI sa bansa ay nakasalalay sa maayos na komünikasyon at kaisipang nagpapahalaga sa layuning maiangat ang bawat isa. Kaya po iniimbitahan po namin kayo na samahan nyo po kami – to connect, to collaborate, and to capacitate.” The PSU team’s benchmarking itinerary concluded with a meet-and-greet with the UPLB’s Chancellor and an alumnus of PSU-Bayambang, Dr. Jose V. Camacho, Jr. who in turn received the group with a warm and genuine Pangasinense hospitality. After a hard day’s work, the PSUnians were treated with a sumptuous meal in a fellowship dinner prepared by the Office of the Chancellor, Graduate School, and College of Economics and Management at the CEM Function Hall. The gracious team of hosts also entertained the delegates showcasing their talents in singing with Chancellor Camacho delighting and getting the crowd’s groove on with his rendition of Michael Buble’s ’Sway’. The guests reciprocated with one of its member serenading the spectators with a rendition of the timeless Pangasinan folksong “Malinac Lay Labi” and another strutting a pop dance number which definitely made everybody dance in the air. Exchanges of words of gratitude between the officials of the two institutions formally concluded the merriments with the PSUnians retiring at the university’s Continuing Education Center Obdulia F. Sison Hall (CEC OFSH).